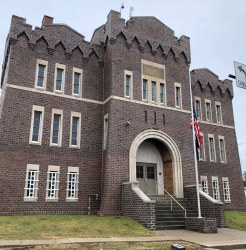 In the first years of the twentieth century, Athens’ citizens formed a new National Guard company. The guardsmen initially held drill at the Campbell Block on Court Street, but soon the Athens Commercial Club began advocating for an armory from the Ohio National Guard. In 1912, the Armory Board approved the request. Plans were drawn up for the armory and the Guard purchased land from the Athens Brick Company at the foot of Shale Hill. Construction began in the spring of 1915 and the Armory opened in December. In March of 1917, the city held a dedication ceremony and parade. Before World War I, the Athens Armory housed Company L and the Machine Gun Company, both part of the 7th Infantry Regiment, Ohio National Guard. When the National Guard entered federal service in 1917, Company L and the Machine Gun Company became part of the 37th “Buckeye” Division. Although the Guardsmen were training and fighting overseas, Athens’ armory remained in use. The military inducted National Army draftees into service at the Armory and the Ladies Aid Society held benefits for the soldiers in the building. After World War I, the Ohio National Guard restructured its formations and the Armory became home to Battery C, 134th Field Artillery. Throughout the building’s history, civilians used it for community events such as dances, fundraisers, boxing matches, and even rummage sales. The last artillery battery left the Armory in 1992 and the Guard sold it to the City of Athens in 1997.