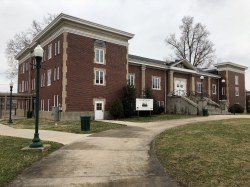 With a mission to protect citizens at home and aboard, the Ohio National Guard was originally established as the Northwest Territory Militia in Marietta on July 25, 1788, and has fought in every war since the War of 1812. Built in 1914, this Ohio National Guard Armory served both as Regimental and Company B, 7th Infantry, O.N.G. Headquarters. Later Company A, 166th Infantry, 37th Division, occupied the dual-purpose armory. The armory served Washington County as a departure point for soldiers leaving for service in World War I, World War II, and Korea. The armory also served the area in times of crisis and celebration, often used by the Red Cross, Marietta College, and other civic groups.