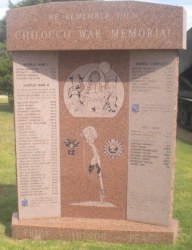 This memorial is located in a grassy area to the east of the 45th Infantry Division Museum in Oklahoma City, Oklahoma. The memorial stone is composed of red granite, and is dedicated to alumni of the Chilocco Indian Boarding School who gave their lives in WWI, WWII, Korea and Vietnam. It was dedicated on June 9, 1990, by Chilocco's National Alumni Association on Chilocco's 106th Anniversary.

An inscription along the bottom of the memorial reads:

“To those of the 279th Infantry Regiment who joined with us in combat and fell.

Dedicated to Chiloccoans who gave their all