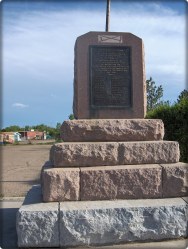 This memorial stone is located in the town of Eagle Butte, and honors the Sioux veterans, chiefs, and valiant men who died fighting in WWI.

The impetus to erect this memorial came from Congress, in April 29, 1930, when they passed the resolution to build a memorial in order to honor the twenty-five Sioux men who fought in WWI.