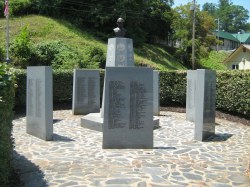 This memorial site is located within the Cherokee Veterans Park. The memorial site, itself, consists of a seven sided granite stele topped with a bronze bust of Medal of Honor recipient Charles George. He is shown wearing an army helmet with the Medal of Honor around the neck. Each side of the stele has a pictograph representing one of the seven clans of the Cherokee Nation: Deer, Blue, Long Hair, Wolf, Bird, Paint and Wild Potato. Incised on the front is the Great Seal of the United States. Below this are the Seal of the Cherokee Nation, then the Fox clan, and then the list of Cherokee veterans killed in action. The other sides of the stele show the Coat of Arms for the Army, Navy, Marine Corps, Coast Guard, Air Force and Merchant Marine.

Encircling the stele are seven table-stones. They list by clan the names of every known Eastern Band of Cherokee Indian that has served in the armed forces since the war of 1812.

At the entrance to the memorial site is a lectern top granite block with a bronze inscription plaque. On the front of this block, in color, is a mountain landscape. Superimposed over the landscape is a seven sided Cherokee star. Pictured inside the star is an Indian with long flowing hair, trees and mountains in moonlight. And the inscription on this stone reads: