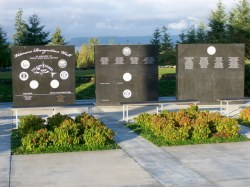 This memorial site consists of five grey granite memorial stones. The middle stone bears an inscription which reads: “Veterans Recognition Wall. In memory of those who have served.” Below are the various seals of the military and the image of a whale with an inscription atop it which reads: “Tulalip Tribes.” Below are inscribed two lists of names for the KIA-MIA and Gold Star Mothers.

The four other stones bear the names of Tulalip veterans.