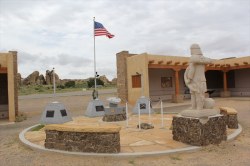 This is a unique memorial which recognizes not only Acoma veterans, but also all US veterans. The memorial site is composed of a marble statue of an Acoma warrior in traditional attire, an engraved arrowhead of granite bearing the seals of the Pueblo of Acoma, and the five branches of the US Armed Forces, a central granite pedestal behind the arrowhead, and two flanking granite pedestals inlaid with bronze plaques bearing the names of members of the American Legion Post 116.

The dedication on the central granite pedestal reads: "This Memorial Dedicated to the Pueblo of Acoma Veterans/Warriors who served in the Armed Forces of the United States of America With their Warrior Spirit, along with all Veterans, shared a common and undeniable goal 'To protect Acoma, and our country’s freedoms.' The Warrior – An Individual of sacrifice, loyalty, and freedom."