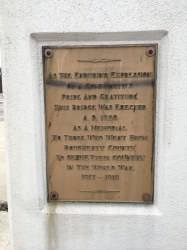 1920 plaques. “As the enduring expression of a community's pride and gratitude, this bridge was erected A.D. 1920, as a memorial to those who went from Dougherty County to serve their country in the World War. 1917 - 1919.”

“We hold in grateful remembrance those who stepped from the pursuits of peace in response to the call of their country and of civilization and in the World War 1917-1919 offering themselves for the maintenance of American rights for the preservation of American ideals and for the realization of humanity’s hopes.”