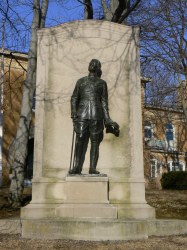 This is a bronze standing figure of Col. Raynal C. Bolling, an aviator in the American Expeditionary Force of World War I. The figure wears a WWI uniform and holds a cane in his right hand. Behind is a stele relief of two airplanes flying among clouds.  Greenwich resident Bolling is credited with laying the foundation for the U.S. aerial warfare program in France, and died near Amiens on March 26, 1918.  He was the first high ranking American officer to die in France.  Bolling Air Force base near Washington, D.C. is named for the aviator.  The sculptor of the Bolling monument, Edward Clark Potter, also created the lions outside the New York Public Library, the statue of General Henry Warner Slocum in Gettysburg and other monuments.

Detecting your location...
No information to be displayed !
David Wold