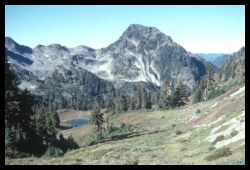 Named for Private Roy Muncaster
Killed In Action on February 5, 1918
U.S. Army - D Co., 6th Batn., 20th Engineers
Former District Forest Ranger, Olympic National Park
February the 5th 2018, the centenary of the sinking of the troopship Tuscania by a U-boat off the Oa killing more than 200 American soldiers and British crew. There was an enormous effort made by local people to rescue and tend the survivors of the disaster and to recover, identify and bury with honour the bodies of the dead.
Scotland’s Kilnaughton military cemetery has a particular significance. Not only are British crewmen from the Tuscania buried there, but the one American soldier remaining on Islay from both the sinking of the Tuscania and the Otranto still lies there. Private Roy Muncaster had worked for the National Forest Service before enlisting in the US Army shortly after America declared war on Germany. Born to parents who had emigrated to Colorado from England, Roy Muncaster was a tall, fit, blue-eyed, cheerful American doughboy.

Muncaster served with the 20th Engineers, a forestry regiment that would manage French forests and turn trees into the timber necessary for barracks, bridges and duck boards for trenches. He was a graduate in forestry from University of Washington. The twenty-five-year-old had left his job as a ranger in Washington State’s Olympic National Forest to join up.
On the evening of February 4th, he and the rest of the SS Tuscania’s passengers were treated to an on-board entertainment, at which a Sergeant from Oregon sang the popular song, ‘Asleep in the Deep.’ It was an uncannily prophetic choice.

After the torpedo struck, the practical forester, Roy Muncaster, and his fellow forester Sergeant Everett Harpham from Oregon, spent more than an hour struggling with the rope pulleys to launch lifeboats from the stricken ship for other men. Eventually they slid down a rope into what they believed to be the last boat to leave the foundering liner. They pulled away as fast as they could for fear of being sucked into the whirlpool that the Tuscania would create as she plunged to the bottom of the sea.

Many of those in the lifeboats were picked up by destroyers and naval trawlers – they were the lucky ones. A destroyer slid past the lifeboat that Everett Harpham and Roy Muncaster shared with as many as 60 others. A Royal Naval officer shouted to them: ‘Float around a while boys. We’ll pick you up later.’ But the destroyer never came back. It was pitch black, the sea was rough and, as that bitterly cold February night wore on, the hopes of survivors who had not been picked up by destroyers or trawlers were fading. None of the men were dressed to withstand the cold, or the perishing waves that broke over them. They had no idea where they were heading.

By about 1.00 am – nearly six hours after the Tuscania was torpedoed – Everett Harpham and Roy Muncaster were desperately trying to row their frail lifeboat away from the seething waves that were smashing into the rocks of the Oa. When they had first glimpsed land through the darkness they thought they were heading for a wooded island, before realising what they were seeing were cliffs. An officer hurled his flashlight ashore, and the men on board could see white foam dashing high on the rocks.

Harpham described the fight with the sea. ‘We tried to row away, but we had drifted so near that the breakers were taking us in faster than we would row in the overcrowded boat. Muncaster was handling the oars when the boat struck the rocks and was very cool and courageous all through the terrible experience. I was very sick in the lifeboat myself and could do nothing but dip water to keep us from foundering. Just before we struck Roy slapped me on the back and said, “Cheer up Harp, we will get the Kaiser yet.” That was the last I heard him say. Finally our boat struck a rock with a terrific crash and broke in a dozen pieces and after that it was every man for himself.’

In 1920, most of the bodies of Americans buried on Islay were exhumed and repatriated to the USA, or buried in the American Cemetery at Brookwood in Surrey. However, one American still lies buried in Islay soil – Private Roy Muncaster. His family’s wishes were that their son and brother remained where the people of Islay buried him with respect and sorrow, and to the sound of a lament played on the Highland pipes as a homemade American flag fretted in the wind. Roy Muncaster is commemorated in the Olympic National Forest in Washington State, where a mountain is named after him in the area he once served as forest ranger.