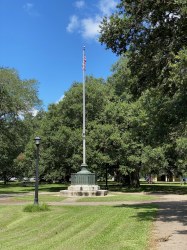 At this one quiet spot, you have a living connection with the battle of Verdun, the conquest of Palestine, the greatest military victory in Italian history, and the charge up San Juan Hill. So after a paragraph on the park and its birds, this review will focus on telling you where this spot is, why military leaders from around the world came to it, and who they all were.

The Roll of Honor is on an irregular polygon: bronze panels six columns wide alternate with narrower ones that are three columns wide. Most columns bear about 60 names of Louisianans who died in the war (see Corner of Memorial photo). The vast majority were Army personnel, although the last Army plaque lists 40 Marines and 108 Sailors who were killed (see USMC and Navy Plaque photo). Some Army casualties may have been aviators, but there was no Air Force then, and nothing indicates that someone was an aviator rather than an artilleryman or infantryman.
World War I was the largest war in human history, up until then. So New Orleans wanted a memorial to the Louisianans who’d lost their lives in the Great War, within a ring of live oak trees, which can live for over a thousand years.
The first tree was planted by General “Blackjack” Pershing, the American commander-in-chief during WWI, who officially broke ground for the memorial in 1920.
At Audubon Park, the same year that Pershing planted one live oak, a second one was planted by the French General de Division Robert Nivelle. Nivelle, an artillery officer, took over command of Verdun halfway through that year-long battle, and promised the French troops “they (the Germans) shall not pass”.
In 1921, two more generals planted live oaks at Audubon Park: Ferdinand Foch and Armando Diaz.
Foch was Marshal of France and the supreme commander of the Allies in 1918 (basically, the Eisenhower of the first war). Foch was the foremost military strategist in the French Army. Armando Diaz was the Italian general who defeated the Austro-Hungarians, precipitating the collapse of the Hapsburg Empire, and thereby the collapse of Germany. In 1935, Japanese military representatives planted one last tree. The records all say that they were “Gen. Takashita and Lt General Niomiya” . This information is subject to verification.

Detecting your location...
No information to be displayed !
Remi Schexnayder