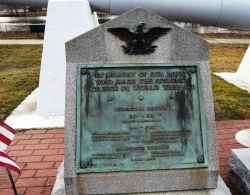 A small memorial plaque sits beside Woodstown's Memorial Lake, both named in memory of local resident Charles F. Pancoast, Jr. who died in World War I.  The local American Legion Post is also named after him.

Today, additional veterans' memorials have been added both to the plaque and the site, commemorating other wars.  Two mounted cannons are also on display.