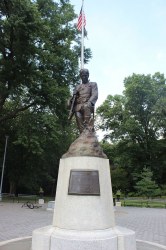 In 1923 plans were drawn up for a memorial at the Myrtle Avenue entrance to Forest Park’s main thoroughfare, signifying a new “Memorial Drive,” and 70 pine trees were planted to commemorate those from the neighboring community who died in combat during World War I. This monument, including a sculpture of a soldier, an ornamental flagstaff and bronze honor rolls, honors their valor and sacrifice. A gift of the Richmond Hill War Memorial Committee and the Gold Star Mothers Association of Richmond Hill, the monument was dedicated on November 10, 1925.

The sculpture by Joseph Pollia (1893-1954) represents a standard infantryman known as a “doughboy.” This name is commonly attributed to the rudimentary biscuits consumed by troops, though derivation of the term doughboy remains in question. It was first used by the British in the late 18th and early 19th centuries to describe soldiers and sailors. In the United States, the nickname was coined during the Mexican-American War (1846-1848), and was widely popularized during World War I (1914-1918) to refer to infantrymen. After the war, in which Americans saw combat in 1917-18, numerous communities commissioned doughboy statues to honor the local war heroes.

The Richmond Hill War Memorial is one of nine such doughboy statues erected in New York City’s parks. Pollia’s conception depicts a mournful soldier whose head is bowed in contemplation, his rifle and helmet slung over his right arm. Some observers have noted the resemblance of the subject to silent film star Francis X. Bushman, whom Pollia may have used as a model for the statue. The sculpture has also been referred to as My Buddy.

The monument was designed by William Van Alen (1882-1954), who is best known as the architect of Manhattan’s famed Chrysler Building. Italian-born sculptor Pollia was responsible for nearly two dozen public monuments, and also sculpted in 1936 the statue of General Sheridan in Christopher Park in Manhattan. Pollia sold a second cast of My Buddy to the Storm Lake Service Star Legion in Storm Lake, Iowa, and it was installed in that city’s Chautauqua Park in 1926.

The adjoining flagstaff, dedicated in 1926, includes a pedestal of granite with ornamental bronze elements including decorative waves, garlands and acanthus leaves, as well as ram’s heads. In 1987 the adjacent oval plaza was dedicated to Sergeant Joseph E. Schaefer (1918-1987), a resident of Richmond Hill who distinguished himself in World War II, and in 2001 the City restored the Richmond Hill War Memorial and flagstaff.

At the dedication ceremony in 1925, Queens Parks Commissioner Albert C. Benninger accepted the memorial on behalf of the City, and the sculpture was unveiled by Mrs. Mathilda Burling, President of the Richmond Hill Mothers Association. The proceedings were disrupted by a rain storm, and were transferred to a nearby auditorium. The chief speaker, United States Senator Royal S. Copeland used the occasion to comment on a proposed government takeover of the coal industry, and commented, “Someone has said that the purpose of government is to protect property…I believe that the people in general hold that the purpose of government should be to protect humanity.” Several generations later, the Richmond Hill War Memorial still stands as a tangible reminder of those who fought in defense of this principle.