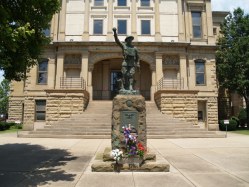 Detecting your location...
No information to be displayed !
Single figure -- soldier
The Doughboy’s bayonet was lost at some point, but has been replaced, and the sculpture is in relatively good condition in comparison to other Doughboys around the country. The building shown in the photograph is the Courthouse Annex, rather than the Courthouse, which is to the left and behind the Doughboy, but not visible.
New Philadelphia American Legion