WWI Memorial a.k.a. "The Cannon" 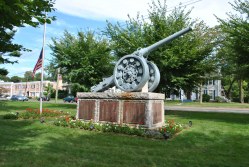 This monument was erected and dedicated in front of the Norwalk Library on July 16, 1921. The monument in its entirety is made up of a French cannon on the top and a rectangle granite base that has copper tablets on every side with the names of the soldiers from Norwalk who fought in World War I.  In 1950 the monument was moved to Norwalk Green.  The 155 mm cannon was made in Bourges, France in 1877 for the French Army.  It was stationed in Verdun where the soldiers from Norwalk, part of the 26th Yankee Division, worked with the French Army. The plaque on the monument states that the cannon was captured by the German Army and then recaptured by the French Army.

Detecting your location...
No information to be displayed !
Jeff DeWitt