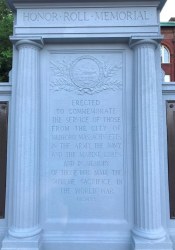 The monument, constructed in 1920 in front of the former Medford High School, features the names of veterans from Medford who served in World War I.

The central inscription reads: "Erected to commemorate the service of those from the city of Medford, Massachusetts, in the Army, the Navy, and the Marine Corps and in memory of those who made the supreme sacrifice in the World War. MCMXX"

Detecting your location...
No information to be displayed !
Ruaidhri Crofton