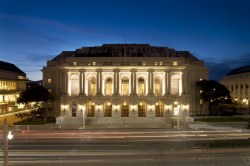 In commemoration of the signing of the 1918 Armistice ending The Great War, the San Francisco Performing Arts Center Foundation organized a series of exhibits and displays in the lobby of the War Memorial Veterans Building and the American Legion’s Veterans Gallery.  The War Memorial Veterans Building and the War Memorial Opera House comprise the War Memorial Complex. San Franciscans, inspired by the ending of World War One, in the 1920's initiated the building of a war memorial dedicated “to all who served.’ The complex opened in 1932 to Bay Area acclaim.  The Centennial Commemoration included banners, displays and video monitors depicting various historic milestones of the war and their effect on the San Francisco Bay area from the declaration of war by Congress in 1917, City celebrations of the armistice signing in 1918, to the return of local veterans in 1919.