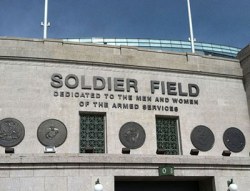 Opened in 1924 as the Grant Park Municipal Stadium, in 1925 the stadium was renamed Soldier Field to honor the men and women who lost their lives during World War I. The ceremony to mark the name change was held on Armistice Day and began with a firing of guns at sunrise, a 21-gun salute at 11:00 am, and included parades and ceremonial flag raisings.   Its formal dedication as Soldier Field was on Saturday, November 27, 1926, during the 29th annual playing of the Army–Navy Game. Its design is in the Neoclassical style, with Doric columns rising above the East and West entrances. The stadium cost $13 million to construct ($182 million in 2015 dollars), a very large sum for a sporting venue at that time. (Although it opened in 1924, construction wasn’t completed until 1939).  A Spirit of the American Doughboy Memorial, created by American sculptor Ernest Moore Viquesney (1876-1946) in 1926, originally placed in Chicago’s Garfield Park and dedicated to the service men and women who gave their lives during World War I, was re-located in 2003 near Gate O of Soldier Field.  It stands raised on a marble slab inside a protective glass circle with an etched inscription.