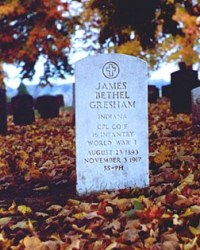 World War I US Army Soldier James Bethel Gresham was a factory worker in Evansville, Indiana when in April 1914 he enlisted in the United States Army. In June of 1917, as part of Co F of the 16th Infantry, 1st Infantry Division, he was part of the first group of American troops sent to France. A few months later he became one of the first three American soldiers killed in the war. In the pre-dawn hours of November 3, 1917, German soldiers attacked the Americans in their trenches near Artois, France. The Americans were vastly outnumbered, and engaged in hand-to-hand battle with the enemy. At the end of the encounter, three American soldiers were dead, five sounded and twelve taken prisoner. Corporal James Gresham, along with Private Thomas Enright and Private Merle D. Hay, were buried on the battlefield where they fell. Corporal Gresham was later reburied in the American Cemetery in Bathlemon, France, and finally in 1921 was returned to Evansville and buried here in Locust Hill Cemetery.  Linden trees have been planted near his grave, and that of his mother Alice Gresham Dodd, to reflect the landscape of the French countryside which he died defending.