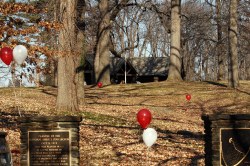 In Baltimore’s historic Druid Hill Park, a grove of oak trees stand sentinel before a simple, elegant stone and slate structure. For nearly one hundred years, this serene, sacred place has held the memories of thousands of American families touched by the First World War. It is possibly the oldest and largest scope memorial to the Great War in the United States. In October 1919, women attending the War Mothers of America national convention in Baltimore travelled uptown to Druid Hill Park. In a quiet ceremony, mothers, sisters, and daughters planted 48 pin oak saplings – one for each of the United States. Five more trees stood for the three U.S. Allies, President Woodrow Wilson, and the City of Baltimore.  Cardinal Gibbons gave the blessing. The French ambassador to the U.S. gave the heartfelt gratitude of his nation. The State of Maryland donated the trees, the City of Baltimore donated the site and the upkeep - and the women gave their sweat and tears to create the Grove of Remembrance. Both the past and the future were present – aged Civil War veterans attended, as well as 1,000 school children holding a giant U.S. flag. "Some of the scenes were unforgettable," The Sun reported as it described women planting trees in memory of the sons they had lost. "The silence was broken only by the sobs of the Gold Star Mothers." The Grove became a touchstone for grief, solace, and remembrance. On Mother's Day in 1927, former first lady Edith Wilson led groundbreaking ceremonies for a memorial stone-and-slate pavilion at the grove. Designed by noted Baltimore architects Palmer & Lamdin, the pavilion honored Lieutenant Merrill Rosenfeld, an Army officer and Baltimore attorney who died in the Argonne Forest in 1918. A bequest from his father added this sheltering focal point to the Grove.  Over the years, other trees have been planted for other wars and sacrifices. Through the decades and generations since, the Grove and Pavilion have stood stalwart and seen the neighborhood change. The Grove of Remembrance was restored, improved, and rededicated in October 2019  in commemoration of the centennial of World War I.