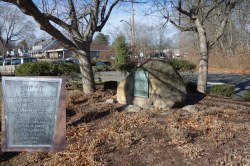 In 1922, the Borough of Oradell, New Jersey, set a memorial stone honoring the sixty-nine Borough residents who participated in World War I as members of various military branches, including the American Expeditionary Forces, U.S. Marine Corps, U.S. Army, YMCA, U.S. Navy Army Student Training Corps, and the U.S. Naval Reserve. The bronze plaque affixed to the boulder dedicates the stone, so that future generations may also know and render honor to those young men and women who responded to their country's call in times of peril.