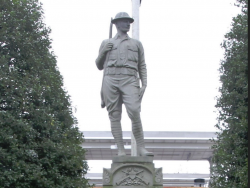 Ross Plaza, site of the Lynbrook Doughboy Monument, was acquired by the Village in 1938 and has evolved over the years to honor the fallen from each of the major wars.  The Lynbrook Doughboy (also called the Soldiers and Sailors monument in the 1920s) is a statue of a World War I soldier and the centerpiece of the village’s war monuments. On the four-sided pedestal below the statue are the names of 15 local soldiers killed in action in World War I. The inscription on the back of the statue reads, “Erected by the citizens of Lynbrook and vicinity, dedicated on 12th day of October A.D. 1920.”