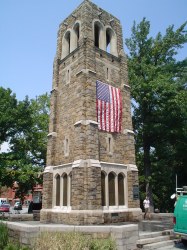 The Riverdale, Spuyten Duyvil, Kingsbridge War Memorial Bell Tower was designed in 1930 by distinguished architect Dwight James Baum (1886-1939). The memorial honors those from Riverdale, Spuyten Duyvil and Kingsbridge who gave their lives in World War I. Construction on the memorial tower began on July 4, 1930, with the laying of a cornerstone containing a time capsule. Initially known as the Memorial Tower, it was dedicated on July 4, 1931. The dedication was conducted with great fanfare, as “observation planes” from the Twenty-Seventh Division flew overhead circling the monument three times dropping flowers upon the crowd, and pigeons were released from the belfry. In his remarks, Alderman Alford J. Williams commented of the memorial tower, “It is built of native rock and the soil on which it stands is that which was trampled by those boys from here who died—those boys who died so that we may enjoy the liberty handed down by our forebears.” At the base of the monument three of the four sides feature sets of three bronze honor rolls, listing the names of the local soldiers who served from the three adjacent communities. In total 700 residents enlisted in the war effort, 29 of whom sacrificed their lives in war in the service of their country. The tower houses an extraordinary historic artifact—a bronze bell cast in Spain in 1762 for a Mexican monastery, and captured by General Winfield Scott in the Mexican-American War of 1846-1848. When the bell was first brought back to New York City, it was housed at a fire watch tower at Jefferson Market in Greenwich Village. It was later moved to a Riverdale firehouse, where it tolled daily at 8 a.m., noon, and 9 p.m., until it was installed it in its current tower in 1931.