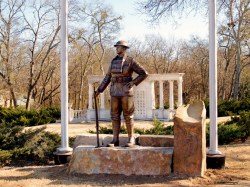 The Fort Towson World War I Memorial honors the memory and sacrifices of all the brave men from Fort Towson, Choctaw County and the State of Oklahoma who served and/or gave their lives in World War I.  The memorial was completed in 2018 on the centennial of the Great War.  To understand the history of the Fort Towson World War I Memorial, one must go back to the mid-1990’s when Margie Hopson Motley made the decision to give back to the little town in Oklahoma where she grew up during the Great Depression. Margie Hopson was born on September 26, 1922 in Ardmore, OK and moved to Fort Towson, OK in 1924 where she lived until 1935 with her parents, Cecil & Jimmie Hopson. Cecil Hopson served in World War I, initially in the Cavalry Corps and later in the Tank Corps, and died at the relatively young age of 47 due to complications from exposure to mustard gas in World War I.  For this project Hopson Motley commissioned a new Doughboy statue in the likeness of Cecil, refurbished a local Towson park, installed a memorial arch and flagpole and even purchased the old library building across the street to install a WWI museum. She did all this as a part of the centennial of WWI, to honor her father Cecil and the town in which she grew up.  Sadly, Margie Hopson Motley passed away in January 2018; she was 96 years old.