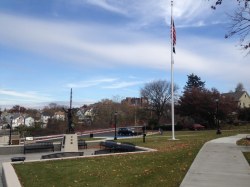 Col. Frank Duffy was the highest ranking officer from Scranton to be killed in action during World War I.  In November 2018, to mark the 100th anniversary of Armistice Day 1918, the new Frank Duffy Memorial Park was dedicated, including a Viquesney "Spirit of the American Doughboy" statue and 11 trees which are symbolic of the Great War ending on the 11th hour of the 11th day of the 11th month of 1918.  Since its unveiling on Memorial Day 1940, the statue had previously been standing at the foot of the nearby Col. Frank Duffy Memorial Bridge. Frank Joseph Duffy was born in Scranton in 1884.  After working as an electrical engineer for several years, he became a doughboy after America joined the war in 1917.  He was quickly promoted to Lieutenant Colonel, second in command of the 103rd Engineers (which still exists today as a unit of the Pennsylvania National Guard).  He was killed in August 1918 on a scouting expedition, just three months before the end of the war