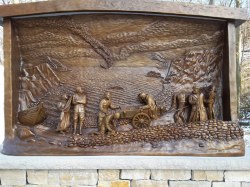 The Tuscania Memorial is a bronze relief sculpture that commemorates the rescue of more than 1,900 American soldiers on the night of February 5, 1918 by the British Royal Navy after their troopship, the Tuscania, was torpedoed by a German U-boat off the northern coast of Ireland.  More than 2,100 Americans were aboard the Tuscania when it was torpedoed; altogether 215 Americans died, including 20 men from Wisconsin. The Tuscania Memorial was designed by local sculptor Homer Daehn.  Every effort was made to capture the drama and historical authenticity of the rescue operation as it actually happened.  The memorial was officially unveiled to the public on November 10, 2018.