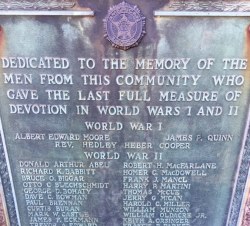 First dedicated in 1921, this memorial initially consisted of four boulders encircling a flag pole.  A boulder was dedicated to each of three Riverside residents killed while serving in World War I, and the fourth boulder was to commemorate all of those killed during the Great War.  The memorial was expanded in 1948 with the addition of a much larger boulder with a plaque honoring Riverside residents killed in action during World War II. After time, additional plaques were affixed to list those killed while serving in the Korean and Vietnam Wars.