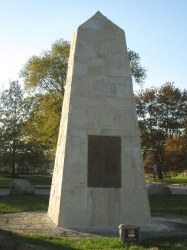 Five hundred men from the Wheaton area enlisted in World War I from 1917 through 1919, 13 of whom died in service. In 1922, a memorial consisting of two bronze plaques with the names of all 500 men was mounted on an obelisk and placed at the Warren L. Wheaton home at Roosevelt and Naperville roads. Five hundred ash trees were planted along Roosevelt Road leading up to the obelisk to create Wheaton’s Road of Remembrance.  When the road was widened in 1931, the trees were moved to various parks throughout the city, and a new obelisk was built at Northside Park and rededicated in November 1936.  Through time, the obelisk became worn and damaged by age.  Eventually, the original bronze plaques were reinstalled and the memorial was restored and rededicated on Veterans Day, November 11, 2017.