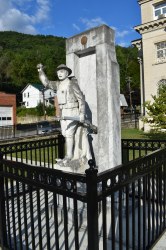 This monument is a stone version of a E. M. Viquesney Doughboy. The engraving on the base reads:

IN MEMORIAM
TO THOSE WHO
SERVED FROM
BOONE COUNTY

A plaque on the rear of the cenotaph has an inscription that reads:

IN HONOR OF
THE MEN OF BOONE COUNTY
WHO SERVED OUR COUNTRY IN
THE WORLD WAR.
THESE MADE THE SUPREME SACRIFICE:
(followed by a list of names)

This Doughboy was dedicated November 11, 1938.  For many years, the monument was left to deteriorate, but sometime, perhaps in 2005 or 2006, the statue and cenotaph were cleaned, and the statue's broken rifle, which had been missing everything in front of the left hand, was restored.

Detecting your location...
No information to be displayed !
Ernest Everett Blevins