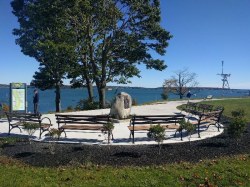 This memorial honors Corporal Jacob Cousins who was the first soldier of Jewish faith from Portland to be killed in World War I.  Over 2,000 people attended the first Memorial dedication on September 22, 1935. This memorial honors one man who died in the line of duty, but also serves as a reminder of the patriotism and sacrifices that Jewish Americans have made for their country. A second plaque on the memorial remembers Portland Jewish soldiers killed in World War II. Jacob Cousins grew up in Portland. He was 24 years old when he enlisted in the Army. His Company C. 328th Infantry fought in the 47-day battle in the Meuse-Argonne region of France. On October 14, 1918, less than a month before the World War I ended, Cousins was killed leading his platoon in battle on the German border. Cousins received the Purple Heart and Silver Medal for his bravery posthumously. He is buried at Meuse-Argonne American Cemetery, the largest military cemetery in Europe with over 14,000 graves.