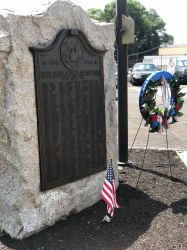 This monument was erected in November of 1919 to celebrate the return of the men and women who served during WWI. The monument previously stood in front of the old Borough Hall location at the corner of West Avenue and Leedom Street. The original monument was a concrete pedestal with mounted mortar shells, and a bronze tablet of all the names of those who served. When Borough Hall was relocated to its current location at 700 Summit Avenue, the pedestal of the original monument was incapable of being moved and unfortunately was unable to be preserved. The bronze tablet was, however, placed on a large piece of granite instead, which is how the monument sits today. In honor of the 100th anniversary of WWI, the bronze plaque was refinished and the memorial was cleaned. This work was completed in time for Memorial Day 2018 celebrations.