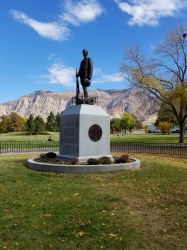 The Ogden World War I Doughboy is located in the Veterans Section of the Ogden City Cemetery and was sculpted by American sculptor Gilbert P. Risvold.  It was dedicated in the 1920s at an old American Legion Post and was moved to its current location after World War II.  After many years of neglect and vandalism, the statue was restored and rededicated on November 10, 2018, in honor of the centennial of the end of World War I.  Of interesting note: the statue has become a local legend among the youth of the Ogden community -- legend has it that if you drive around the statue at midnight, its head will turn to follow you!