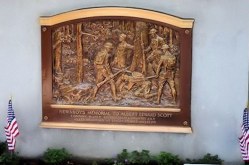 This memorial is dedicated to the local boy who is believed to have been the youngest American soldier killed in the First World War, Albert "Scotty" Scott.  Scotty was just a few weeks into his freshman year at Brookline High School when he lied to a recruiter about his age (15 at the time) and enlisted as a private in the infantry.  He was killed in action at age 16 on July 23, 1918 during an advance by the 26th Yankee Division north of Château-Thierry. Scotty had worked as a newsboy and after his death his fellow newsboys raised $2,000 for a plaque in his honor.  Brookline native Theo Alice Ruggles Kitson, a Brookline sculptor known for her war memorials, was chosen to create the Scotty memorial, which was dedicated in 1921.  A year later his body was disinterred from France and he was buried locally.