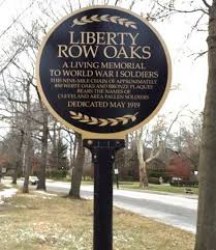 From the Encyclopedia of Cleveland History:

Liberty Row was dedicated on Memorial Day 1919 to honor Cleveland-area soldiers who had died during World War I. The memorial consisted of a series of oak trees planted from Gordon Park on Lake Erie into Shaker Heights. The trees stretched along the then newly renamed Liberty Blvd. (formerly the Lower East Blvd., and after 1981, part of Martin Luther King, Jr., Dr.) through Gordon, Rockefeller, and Wade parks, up Ambler Dr. into Cleveland Heights, and then along North Park into Shaker Heights. A round bronze plaque bearing the name of a dead serviceman was placed in front of each tree. A number of  the trees remained standing (particularly along North Park) into the 2010s and new plantings were replacing lost trees along Martin Luther King, Jr. Drive in 2017. However, a number of the name plaques had been destroyed or stolen by vandals over the years.