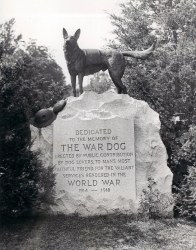 This is a bronze sculpture of a German Shepherd wearing a red cross blanket, standing atop a rough hewn granite boulder. The dog's ears are perked up and its tail is extended straight, in an alert stance. By its front paws are a canteen and a helmet with an indentation, perhaps a shrapnel hole.  The War Dog was dedicated in 1923 to honor the 7,000 military dogs killed during World War I.  The original cost of the monument was $2,500, which was considered to be an enormous amount of money at the time. It was designed by Walter A. Buttendorf and sculpted by Robert Caterson, a well-known designer and builder who had worked on many distinguished buildings including Grand Central Station in New York City.

DEDICATED TO THE MEMORY OF THE WAR DOG. ERECTED BY PUBLIC CONTRIBUTION BY DOG LOVERS TO MAN’S MOST FAITHFUL FRIEND FOR THE VALIANT SERVICES RENDERED IN THE WORLD WAR 1914 - 1918.