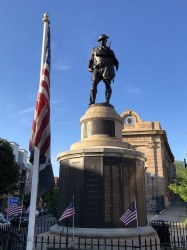 In 1918, the Lawrenceville Board of Trade organized a carnival in Arsenal Park to raise money for the troops fighting in World War I. When the war ended, before the money could be put to use, neighborhood leaders decided to spend it on a memorial instead. The monument was sculpted by Allen George Newman, who was known for his military-themed works including The Hiker, a depiction of a weary Spanish–American War soldier. Newman's bronze Doughboy statue was unveiled on Memorial Day in 1921 with over 20,000 onlookers present; the Pittsburgh Gazette Times described the occasion as the "largest ceremonial event ever witnessed in Lawrenceville". The memorial originally honored the residents of Pittsburgh's Sixth Ward (comprising Lower Lawrenceville, Polish Hill, and the upper Strip District) who served in World War I.

Detecting your location...
No information to be displayed !
WanderingHistorian63