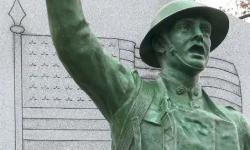 The Wheeling Doughboy was dedicated on Memorial Day 1931.  The statue, affectionately known locally as "Lester", is named in honor of Wagoner Lester Scott, a doughboy from Wheeling who was killed during WWI.​  It is one of many identical "Spirit of the American Doughboy" monuments designed by Ernest Moore "E.M." Viquesney.  Following years of neglect, in a state of disrepair (dented, rusted, missing bayonet and rifle, cracked base), the doughboy was restored and rededicated in 2020.

The inscriptions on the left and right lower sides of the cenotaph read: