"Ghost of the Past" at Luke Air Force Base 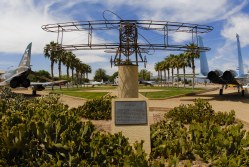 This is a 2/3 scale skeleton form of a WWI SPAD XIII airplane.  It was sculpted by Lucky Styles, with assistance from Sgt. William Harrick, Jr.  A plaque in front gives some details about the performance of the French-built plane (Societe' Pour L'Aviation et ses Derive's).  It also commemorates Lt. Frank Luke, Jr., a Phoenix native who in his SPAD XIII downed 18 enemy aircraft and balloons during 17 days of aerial combat, earning him the distinction of being the first U.S. aviator to receive the Congressional Medal of Honor.  See photo gallery for photo of Lt. Luke.