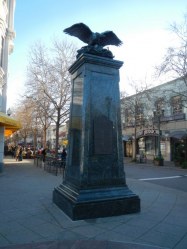 On a multi-tiered marble base is a metal eagle, stretching its wings over a nest of eaglets.  It represents a slain soldier and may have been inspired by the Ohlone Indian tale of how the Santa Cruz Mountains were created.  It was dedicated on May 30, 1928, in memory of those from Santa Cruz County who served in World Wr I and the 25 who died. It was rededicated on March 23, 1993.

DEDICATED TO THOSE FROM SANTA CRUZ COUNTY WHO SERVED THEIR COUNTRY IN THE WORLD WAR, AND TO THE MEMORY OF THESE WHO "GAVE THE LAST FULL MEASURE OF DEVOTION".  1914-1918