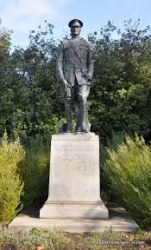 This statue in Golden Gate Park commemorates General of the Armies John Joseph (John) Pershing (1860-1948), the American general and commander from World War I.  The statue was sculpted by Haig Patigian, Armenian-American sculptor, and was dedicated on November 11, 1922.  The inscription reads: "In tribute to General Pershing and the victorious armies of the United States and her co-belligerents during the World War 1914-1918.  Presented by Dr. Morris Herzstein, 1922".  Behind Gen. Pershing's foot is a destroyed German helmet.

For interesting background on this statue see: https://www.outsidelands.org/ggp-pershing.php