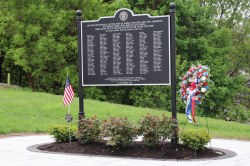 This cast aluminum memorial, dedicated in May 2019, honors the 190 men from Erie County, Pennsylvania, who made the ultimate sacrifice in World War I. Since installation, eleven additional men have been identified and their names will be placed on the plaque. Funds were raised by the Erie County World War One Centennial Committee and the Presque Isle Chapter, DAR.

WE HONOR THOSE WHO SERVED AND THOSE

WHO MADE THE ULTIMATE SACRIFICE FOR THEIR COUNTRY

ALL GAVE SOME, THE FOLLOWING GAVE ALL