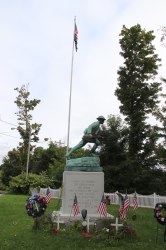 This memorial sculpture, erected in 1926, is of a uniformed World War I soldier marching up a hill with his proper left foot forward. In his hands he holds his rifle on his proper right side. The sculpture is mounted on a tall rectangular base. Originally placed to honor World War I, it now also honors WWII, the Korean War, and the Vietnam War.