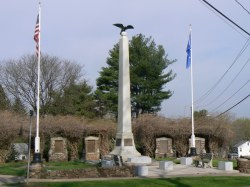 This monument consists of a 40-ft tall shaft of light gray granite on which sits a bronze eagle.  It is flanked by 2 flag poles, and an artillery piece is nearby.  Originally dedicated on November 11,1920 to honor the men and women of Berlin who served in the Civil War, Spanish-American War, and World War I, later plaques were added for World War II and the Korean and Vietnam Wars. World War I veterans are honored with a two-sided memorial at the south end of the pergola. Both sides bear two columns of names listing residents who served in the war. The west face of the monument honors five residents killed in the conflict, including one who died in Red Cross service.