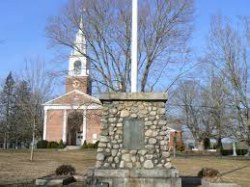 The Memorial to Five Wars, dedicated in 1922, is located in the center of Lebanon Green, in front of the Town Hall and across the street from the First Congregational Church. It consists of a cobblestone pedestal supporting a tall flagpole. A bronze plaque is recessed into each face of the pedestal.  Three of the four 30" x 20" bronze plaques carry lettering relating to the Revolutionary War, the War of 1812, the Civil War, the Spanish-American War, and World War I. The lettering is in thoughtful narrative form, quite different from the standard memorial language often found on such plaques.  The fourth plaque is a bas-relief by Bruce Wilder Saville depicting a composite of three soldiers, one from the Revolutionary War, one from the Civil War, and one from World War I, and a flag. The figure to the group's far right is from the Revolutionary War; he carries a musket on his shoulder. The central figure is a doughboy from World War I; he uses both hands to grasp his rifle. The third man is in Civil War uniform; he carries the colors. The flag opens out above the three soldiers; its staff continues to the group's left on the diagonal to the upper left corner of the plaque, distorting the right angle of the corner as the tip of the pole continues upward. A bronze plaque on a stone slab at the northeast corner of the Green lists names of those from Lebanon who served in World War I and World War II.