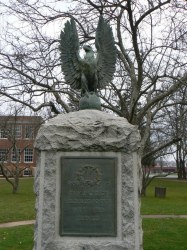 There are three monuments in front of Old Saybrook's OldTown Hall that honor the veterans of the 20th century’s wars. A 1926 boulder monument, topped by a bronze eagle, honors the service of World War I veterans. It bears a dedication on its front (west) face reading “In memory of Old Saybrook’s sons who served".  The east face of the monument has a plaque with two columns of names listing local veterans, organized by service branches: Army (48 names); Navy (18); Aviation (9); and Motor Transport (2) . Near the World War I monument, a granite monument dedicated in 1961 honors local war heroes (see pictures gallery). A dedication near the top of the monument reads, “Erected by the citizens of Old Saybrook in memory of her sons who died at war.” Beneath that dedication, the monument lists heroes and the wars in which they were lost. One person is listed for World War I, 15 for World War II, two for Korea, and one for Vietnam.  A polished granite monument in front of three flagpoles bears the POW-MIA logo. An eternal flame flickers in front of the POW-MIA monument.