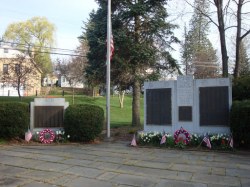 The Plymouth Veterans’ Monument, near the intersection of Main Street (Route 6) and North Main Street, features a monument honoring the two World Wars and Korea, as well as a separate monument commemorating the Vietnam War.  Beneath a dedication, a plaque lists the names of eight residents killed in World War I, 25 killed in World War II and two killed in Korea.  On the left and right sides of the monument, plaques list approximately 200 World War I veterans and about 700 residents who served in World War II. To the immediate left of the Veteran’s Monument, a granite monument honors residents who served in the Vietnam War.  A short walk northeast of the monument, a bronze plaque on a large boulder honors veterans of the two World Wars. The plaque, mounted on the boulder’s southeast face, reads, “Dedicated to the loyal sons and daughters of Plymouth, Connecticut, who served their country during World Wars I and II. Erected through the generosity of Judge Andrew W. Granniss 1953.”