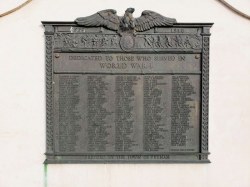 There are several plaques on the Putnam Memorial Bridge, spanning the Quinnebaug River, honoring the Connecticut citizens who served in World War I. On each of the north and south bridge parapets were a set of three plaques, a large central one with an eagle over a scene of infantrymen moving toward a center state seal, and two smaller flanking ones depicting air and sea battles.  The two smaller plaques are missing from the north end of the bridge.