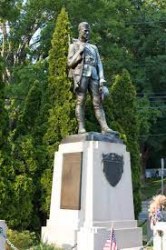 This bronze statue was dedicated on November 9, 1930 on Old Post Road and relocated here in 1987.  It is a bronze figure of a World War I soldier standing at ease.  It was sculpted by J. Clinton Shepherd to honor the enlisted men and nurses from Westport who served in World War I.  A bronze shield on the south face reads, “Dedicated to the citizens of Westport who served in the World War. Erected Nov. 11, 1930.”  Plaques on the west and east sides of the monument’s base list Westport residents who served in the conflict, with the west plaque honoring seven residents who were killed, and the east plaque honoring seven who served as nurses.