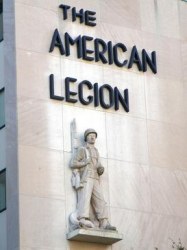 This 13-foot tall sculpture of Indiana limestone is of a standing male having elements of both a World War I Doughboy and a World War II GI. He wears battle fatigues with an unbuttoned shirt, dog tags, pants tucked into his boots, and a helmet.  His rifle is slung over his right shoulder and in his left hand he holds a grenade. Under his left foot is a snake, representing the enemy. This memorial was carved in 90 days by Frank Bowden at the studio of Adolph G. Wolter, and was dedicated on August 14, 1951. Its model was Lt. Hulon P. Whittington, who received the Congressional medal of Honor for his service in World War II.