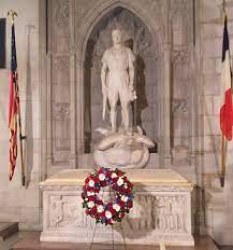 This memorial (statue and tomb) was sculpted by Paul M. Landowski in 1937 to honor Norman Prince, the founder of the Escadrille Lafayette, a unit which fought in World War I.  Prince was born in 1887 in Massachusetts, graduated from Harvard University, and taught law in Chicago. While in law school at Harvard, he became just the 55th American to be licensed to fly an airplane. When World War I broke out in 1915, Prince quit his law practice and sailed to France. After more than a year, he finally persuaded the French government to create an air force in April 1916 (year before the United States entered the war).  This air force became known as the American Escadrille and later named the Lafayette Escadrille in honor of the Marquis de Lafayette, the French officer who served in the Continental Army in the American Revolution. Prince flew 122 combat missions, and shot down five enemy planes. In October 1916, Prince's plane hit a telegraph wire as he was attempting to land. He crashed his plane and broke both legs. He died three days later from a blood clot. He was initially interred at Luxeuil, but later was moved to the Lafayette Escadrille Memorial tomb at St. Cloud (near Paris). In 1937, Prince's father, Frederick Prince, had Norman's body moved to Washington National Cathedral. Frederick Prince donated $200,000 to the cathedral so they could build a chapel in the south choir.